Jacob Miller-Mack, talks about his project at Circuits and Code, December 2011.

His project allows one to use a bike to recharge a battery, and his graphical user interface logs and displays all the data about the recharging process.

Appropriate technology (AT) is technology that is designed with special consideration to the environmental, ethical, cultural, social, political, and economical aspects of the community it is intended for. The term is usually used to describe simple technologies considered suitable for use in developing nations or less developed rural areas of industrialized nations. In practice, appropriate technology is often something described as using the simplest level of technology that can effectively achieve the intended purpose in a particular location. In industrialized nations, the term appropriate technology takes a different meaning, often referring to engineering that takes special consideration of its social and environmental ramification. (wikipedia)

Project Description: To design and build a low-cost, safe LED-based lamp for families in Less Developed Countries (LDCs). The lamp will be powered by a renewable source of energy, such as mechanical energy, and will store the energy in capacitors. 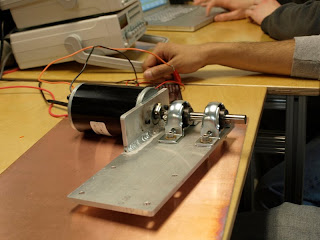 This is a motor configured as a generator. The motor was hooked up to an electric drill and the output voltage was measured. A similar generator will be used in the final design. 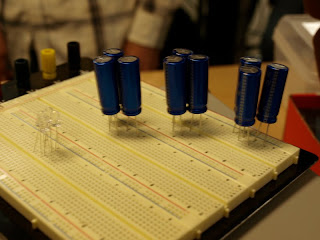 This is the breadboard with the ultra-capacitors used to store the energy and the white LEDs. Students have already been able to store energy in the capacitors and power the LEDs up to an hour.